Spring has definitely arrived. We had just received a small shower the night before, so a fresh spring aroma permeated the air. It was a very pleasant sunny spring day. There were still a few remnant snowbanks around. The Canada Geese have been back for a few weeks now and are calling to each other every morning as they fly over the house. Blue Jays, magpies, and crows are all singing love songs most of the day.

At first glance there seemed to be nothing growing in the orchard yet but, when brushed aside, the dead layer of clover reveal fresh clover shoots already reaching for the sun. Most of the song birds have not arrived back from the south yet so there was little bird song but the honeybees recently moved to our orchard by the apiarist were buzzing everywhere as they were out shaking off their long winter in the hives.

Along one of the rows in the middle of the orchard I spied an orange patch... It's Buddy the fox! He was fast asleep, soaking up the sun. I managed to get within about ten meters before he popped up his head, took a quick look at me and took off... although I could tell he was familiar enough with me that he wasn't giving it everything he had. I have very much loved watching the fox families that we have had in the orchard the last few years, and am very grateful to them as they keep the pocket gophers in control, as well as reducing the general population of voles and mice in the orchard and around the buildings.

I also observed mule deer tracks and droppings in the yard (I saw several there the week before) and Mr Coon had left a large deposit on the deck of the cabin right in front of the door- as if to say " you don't want to let me in, I'll show you what I think of that." Racoons are very cute and amazing animals but I would prefer if they were not around as they are very destructive. They have only been in this part of the country for about the last fifteen years and some research biologists have now determined that they are the largest factor for dabbling duck nesting failures. This morning the sun is shining again but with the ground still soaked I am putting on my lined rain pants to keep my knees dry and taking our newly purchased battery operated pruning shears to the orchard to continue the pruning job I started last November when it was so unseasonably warm.

Stay tuned as we keep you up to date with how our haskap berry orchard is doing every season.

Haskap is introduced to Dr. Oz 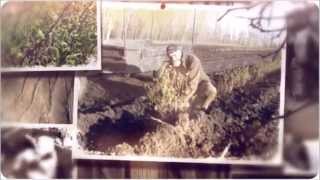